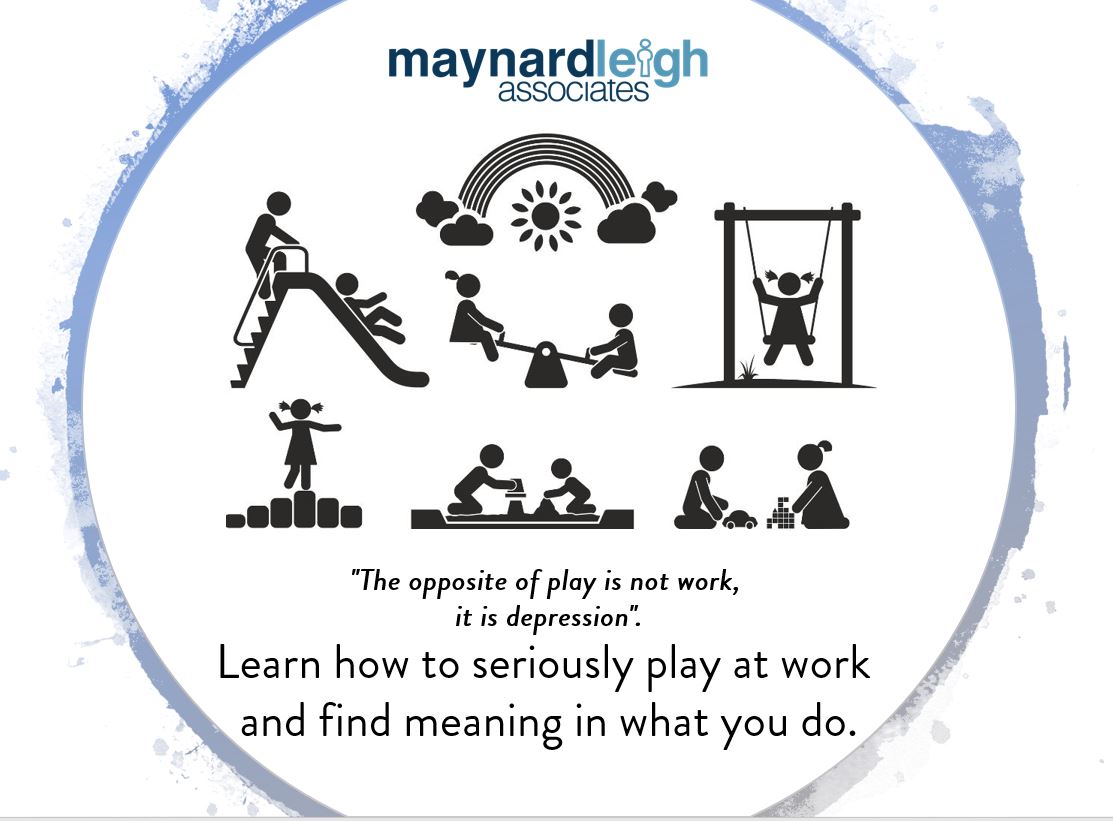 In light of our recent article, "The World of Play" by Executive Performance Coach Sanah Singh Tomar, we decided to look at how play can be integrated into the work place.

One of the teams at Hewlett Packard decided to hold their next meeting on the London Eye. They booked a pod, turned up, and completed the agenda by the time the Eye had completed its cycle.

What makes the difference between that experience and the more usual meeting where employees sit begrudgingly around a table, watching the second hand slowly complete another cycle, desperate to be elsewhere?

“The opposite of play is not work; it is depression.”

So said Brian Sutton-Smith, a dean at the University of Pennsylvania. And yet, often in our profit-driven, time poor, online, mobiled-up world, we seem to have polarised work and play, and demonised one or the other.

Play may have been partly banished by the Protestant work ethic, but it is certainly making a comeback. People are increasingly talking about the “play ethic” and its relevance to our modern way of running companies and our working lifestyles. The fight back began with concepts such as stress management, and more recently work/life balance. Now "serious play" is firmly in the frame. Nowadays, we are finding increasing acceptance from leading companies that play is good for the bottom line.

Serious play and meaningful work is an approach that improves performance, raises motivation, and creates a competitive advantage.

It is serious play which generates in people:

It is these attributes that businesses need in these times.

It’s important to address the unconscious prejudices that many of us might harbour about “play”. Play is not idle, wasteful or frivolous. It is not infantile, nor immature. It is not David Brent in The Office doing a wacky impression of Kermit. Nor is it “having fun because the management told us we had to.”

When we are young children, we are told that there is play, and then there is the serious stuff. At school we have playtime, and then we go inside to learn and work. This leads to an unfortunate and costly divide between the play ethic and the work ethic

It is this misunderstanding about serious play that prompts supervisors or managers to take a tough stance. “We’re not here to have fun, my job is to get things done.” Or ,“We’re here to make money, not play about.” This is a pity, since people seem to be far more productive when they are allowed, or indeed encouraged to manifest the attributes of serious play.

Play is essentially about active and energetic individuals, existing in a dynamic relationship with others. Watch children at play and it’s clear that for all the outward levity, it’s a busy learning experience.

Actors play, though seldom thoughtlessly or without attention. All actors seek to produce outstanding performance. They and their directors know that serious play is a form of alchemy, transforming ordinary situations into outstanding moments.

“Work is not work. It's a hobby that you happen to get paid for," says Richard Burton of Microsoft's Expedia website. Tom Peters, co-author of several best-selling business books, points out that until very recently not a single textbook on management even mentions the idea of fun. It’s a serious business challenge to create a playful culture. And yet, we know that adopting an environment of creativity, curiosity and whole-hearted involvement supports an atmosphere of enthusiasm, commitment and ultimately increased productivity.

Gallup research in the UK shows only around 19 percent of employees feel engaged with their work. Since the higher engagement results in higher productivity, this must concern anyone interested in improving performance at work.

“I think fun should be a motivator for all business. We’ve been successful because we’ve done things differently and that’s made life more fun and enjoyable.”
– Richard Branson

People in an enlivened workplace, where serious play is part of the everyday environment, tend to perform at their best. Research by psychologists shows that in a playful environment, individuals find far more creative solutions for everyday problems than they otherwise would. A culture of serious play helps bring a workplace alive, generates “meaning” in businesses, and makes people keen to turn up each day.

Companies increasingly need their people to work flexibly, to use their creativity and imagination, and to keep adding value. Yet, these are exactly the attributes of playing. Watch any child. Watch any actor.

“The real true source of power in any corporation today is ideas – the rest is housekeeping. Ideas are the DNA of everything that is worthwhile.”
– March Fisher, co-founder Century 21

Meanwhile, new generations joining the global workplace have started to question the previously unchallenged assumptions behind the work ethic. For example, why should they be loyal to a company which shows no loyalty to them? Or why would they find the act of work meaningful even when it often has no meaning? The Snapchat generation wants immediacy of experience, not deferred gratification. Unsurprisingly, most of their heroes play – whether with a football or a guitar. For them, playing is cool, valid and meaningful. Their revolutionary assumption that they’d rather be a player than a worker has already contributed, along with other factors, to consigning command and control style leadership to the history books.

“Play is what you do when you feel at your most free, your most voluntary.”
– JP Sartre

Some organisations have been slow to adapt. According to Glassdoor’s 50 HR and Recruiting Statistics for 2017, fewer than half (49%) of employees would recommend their employer to a friend.

There are examples however of where serious play helps bring people and work to life, to remind them why they are there. For example, EDS in New York recognises those leaders who create an environment of serious play by giving them a prestigious award. Criteria for the award are:

Creates the Culture — Leader appreciates, motivates and inspires their employees.

Together We’re Better — Leader values and fosters creativity and teamwork.

Sets the Example — Leader has a high sense of self-esteem, is able to take themselves lightly, and thereby manages their stress more effectively.

What kind of serious play do you have at work?

Level 1: Laughter — such as happens in a coffee break, or in badinage between people in an open office environment.

Level 2: Creative Enjoyment — where people engage in enjoyable activity that stimulates them to think an act in unexpected ways, and control takes a back seat.

Level 3: A Sense of Meaning — where people enjoy and experience the value of what they are doing and share it in various ways.

Level 4: Caring Contact — where people feel strongly connected with each other; there is a sense of being a part of life, in accordance, and communication is powerful.

Level 5: A Spirited Workplace — where anything seems possible, there is immense energy, creativity, inspiration and a sense of well being, and a belief that the work of the organisation contributes in some way.

While there are many different developmental solutions to reinvigorating the spirit of the company, or re-engaging the winning attitude of a demoralised workforce, the challenge lies at the feet of the leadership of the organisation. People will only be players in response to the kind of leadership demonstrated, and the sort of culture prevalent at work.

Corporate leaders face the challenge of bringing play back into the work place, of legitimising and mobilising it.

Leaders need to learn to:

Serious play and meaningful work links two refreshing concepts that business will need to embrace. Firstly that in business, as in childhood, the concept of a separation between work and play is artificial. Secondly, that more and more people are realising that they want meaning in their work, whether that meaning is found in challenge or in fun, or in a sense of contribution to society.

The most likely conclusion of this is an acceptance that we should change how we work. And play.