So what exactly is Corporate Ethical Responsibility?

Depending on who you ask, this all-encompassing term comes with various meanings. For example, the CIPD (Chartered Institute of Personnel and Development) regards it as: “the impact an organisation makes on society, the environment and the economy.”

Driven by accountants and managers, a rather narrower view defines it as: “A family of professional disciplines helping a company stay competitive.”

It does this it by ensuring that the company remains accountable to its four main stakeholders: customers, employees, shareholders, and communities.

So there you have the classic conflict; between a drive to make money, and the broader view expressed by the CIPD, that corporate ethical responsibility should mainly be about making a positive impact on society.

Different views can trigger a form of corporate cognitive dissonance. That is, where a company must resolve two mutually conflicting stances. Such as maximise short-term returns to shareholders, versus invest in social enterprise projects. Another example is to vigorously pursue export sales contracts, yet refuse to pay local bribes.

Internal conflicts like these may promote unwelcome organisational side effects, like reducing employee engagement, causing confusion over investment choices, or uncertainty about how to handle a PR disaster.

Keep these conflicted views in mind while we transport back to 2011, and the high profile, UK Leveson inquiry. This judge-led investigation reviewed the culture, practices and ethics of the British press.

To one of its public sessions, came the memorable, some might say notorious witness, namely Richard Desmond. He made his money by publishing pornography, later transforming himself into becoming the owner and publisher of the Daily and Sunday Express.

As you might expect, Mr Desmond held only a hazy idea about the nature of corporate ethical responsibility.

Yet who can blame him for his uncertainty? In claiming that everybody’s ethics differ, Desmond demonstrated a common confusion between morals and ethics.

Quite simply, morals are what you or I use, to decide between right and wrong, between what’s good and what’s bad, and between what’s personally acceptable and unacceptable.

Ethics though, have a wider meaning. They’re the norms and rules of society. These govern relationships involving individuals, organisations and communities. So rather than referring to Corporate Moral Responsibility, I prefer the more precise term “Corporate Ethical Responsibility.”

When it comes to these responsibilities though, it’s a boulder-strewn landscape. There is no clear route to the summit and there are formidable challenges for all who enter it.

To reveal something of this landscape, here is the first iteration of a mind map. It charts important aspects of corporate ethical responsibility: 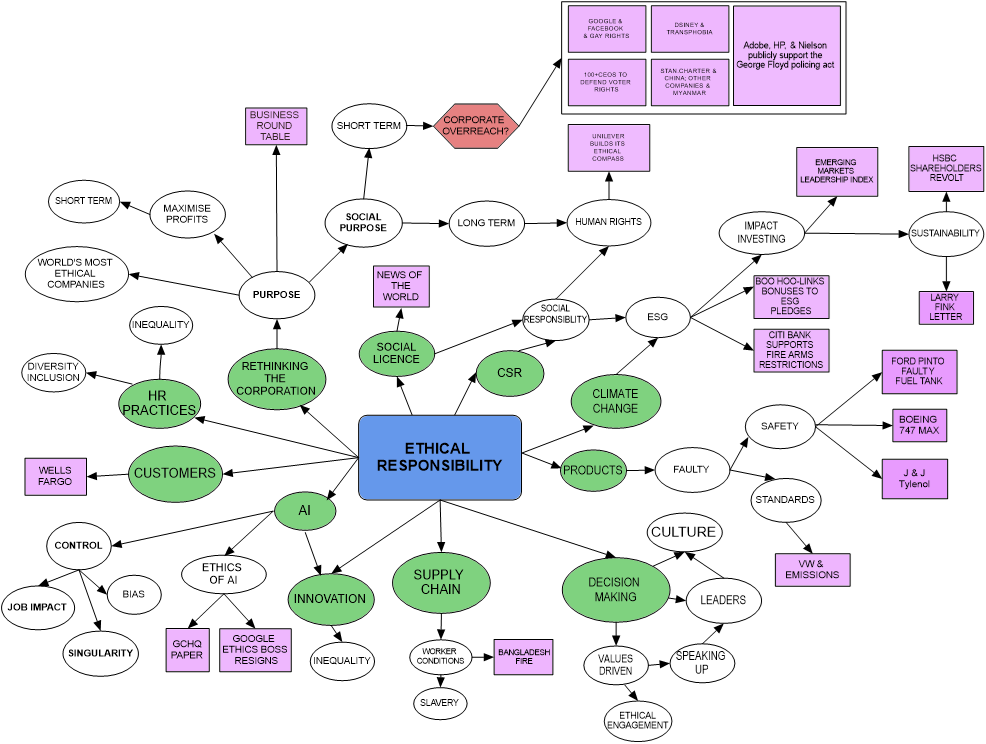 Don’t worry if you find this slightly mind-blowing. It’s not definitive and is only here to reveal how the corporate ethical scene keeps expanding.

The purplish rectangle boxes for instance, highlight some recent company reactions to ethical issues facing them. In the US the polling company Just Capital recently found that 70 per cent of Americans support business leaders taking a stand on social issues.

This didn’t stop the conservative Free Enterprise Project from reprimanding the boss of Levi Strauss. After calling republican voting bills in 47 states “racist and undemocratic”, the CEO was told to shut up and “go back to making blue jeans”.

Even ethically well-intentioned corporate leaders may therefore struggle to establish and communicate a clear, and viable ethical compass, one that guides their people’s attitudes, behaviour, and decisions.

Take for example the idea of a Social Licence. Once it was widely-regarded by companies as an esoteric concept with little relevance to real-life business. But talking at the Mayor’s annual banquet in 2015, the now ex-governor of the Bank of England, surprisingly chose to bring it to life for business people.

Or take the idea that companies should be directly concerned with human rights. When Unilever chose to go down this road it identified some eight areas of its potential ethical responsibilities. Each had serious implications for company policy and action. 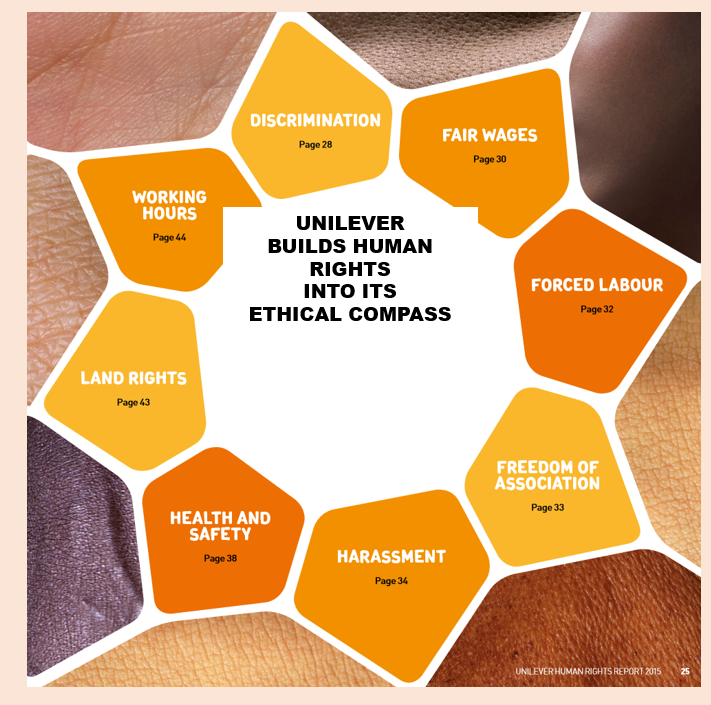 Building these diverse aspects of human rights into a large corporation’s ethical compass represents a major undertaking. You wouldn’t envy Unilever’s head of HR trying to operationalise this expansive ethical agenda, would you?

But is there really a conflict between the drive to make money, versus the broader view that corporate responsibility should mainly be about making a society impact? That classical area of conflict too is changing.

For example, companies putting ethics at the heart of their commercial approach now tend to be more profitable in the long run, than companies that don’t do that.

Similarly CEO activism on matters not directly tied to their profits is relatively new. Corporations are facing changing expectations of employees and other stakeholders. Being judged as ethical is becoming an essential part of good branding.

In other words, ethics pays.

Incidentally, yet more research in the area of what’s called Environmental, Social and Governance (ESG), also shows these more ethically, or social responsible companies outpacing non-ESG companies. The reality of the vast amount of financial resources now pouring into ESG investments speaks for itself.

Given the complexity of corporate ethical responsibility, how can companies find a reliable way of making sound ethical decisions? There is at least one sure route and it’s through leadership. One that puts values at the centre of the organisation and drives its purpose.

The critical choice for many business enterprises is therefore between selecting a genuinely ethical leader and one with rather less commitment to putting ethical responsibility at the centre of the organisation and its behaviour.

Finding the right person though, can prove difficult, no matter how many HR selection tools you apply. In the end, it may come down to selecting the person whose personal values most align with how the stakeholders want the organisation to be.

Many business leaders in many places are coming to realise that they cannot have productivity, profitability and public acceptance, without also demonstrating an ethical responsibility.

In the case of my own company Maynard Leigh Associates we live by five core values and aim for a higher purpose than just making a profit, or being able to pay the rent. Important though these may be.

As a company we exist to “promote humanity, meaning and vitality in the work place.” For us, that defines part of our ethical moral responsibility, and after 30 years trading it still seems to be working.

Based on a talk by Andrew to the Engage for Success Online Forums, May 13th 2021.